Latest laminate piece “La Belle Noiseuse, (I do not love you…)” finished!

It’s been a long time in the making (see earlier post) but my latest laminate piece is now finished! “La Belle Noiseuse, (I do not love you…)” is based on several paintings and drawings dating from 2007/8 and the poem “I do not love you except because I love you” by Pablo Neruda. I started this piece in 2008 and it’s been impossible to finish and assemble the piece until now, which means that I’m very happy to be able to finally see the work as one whole image rather than fragments or two halves. It’s a diptych, two panels joined together and it’s an attempt to further explore the thoughts and emotions that preoccupied me when I made the 4 paintings and 9 drawings that comprise the new image.

It was when I was making the original paintings and drawings that I first read the poem by Pablo Neruda, it really struck a chord at the time and it’s been one of my favourite poems ever since. The poem is on one of my earlier blogpages:

For this piece I wrote the poem on the back of each individual image before they were fragmented so the reverse side has broken sections of the poem repeated over and over.

I’ve also reconstructed the poem in the right hand panel using some of these fragments. 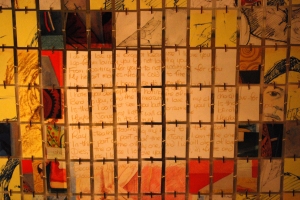 I’ve titled the piece after the poem and also the beautiful film, “La Belle Noiseuse”, which in turn is loosely based on a Balzac short story. All three were in my mind during various stages of production and if you haven’t seen the film it’s well worth checking out (even if it is 4hrs long!), here’s imdb’s verdict on the movie:

I’m still to get a really satisfactory photograph of the piece, it’s very large, very reflective and until I can get it to a larger space it’s difficult to light it or display it properly to take the ideal shot, but for now I’m just enjoying having it around and I’ll look forward to seeing it in a gallery setting hopefully soon.

Now that this piece is finished I’m turning my thoughts to starting some painting and also to my next laminate piece which is already in my mind.

5 Responses to Latest laminate piece “La Belle Noiseuse, (I do not love you…)” finished!